Since 1996, the scientific literature on rear-end collisions has shown that: 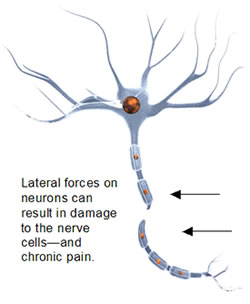 The role of the facet joints in chronic pain after auto injury is bolstered by the fact that when the nerves that innervate the facet joint are "cooked" via radiofrequency neurotomy, the pain in the neck goes away.

What hasn't been determined, however, is the source of the pain. Is it from inflammation or scar tissue in the ligament? Is it pain from the joint? Now a new study from Wayne State University provides some answers.

The researchers in this study decided to look closer at the physiological changes that occur in the injured facet ligaments—specifically, they looked at microscopic changes in the nerves that innervate the joints of the spine.

Lateral forces on neurons can result in damage to the nerve cells—and chronic pain.

The authors performed the experiment on ten live goats. (The researchers used goats in their experiment, because they have a similar structure to human spines.) The goats were anesthetized, and the left facet joint in the C5-C6 spinal segment was stretched similarly to being in a rear-end collision. The right facet joint was left unstretched.

After the experiment, the facet capsules were examined for changes in the axons of the nerves. The facets were photographed, and observers who were blinded to which samples were stretched or unstretched evaluated the images. The authors found the following:

The authors found "axonal swelling and retraction balls" in many of the injured nerves. These "are hallmarks of diffuse axonal injury (DAI) in studies" of traumatic brain injury. Diffuse axonal injury occurs when nerve fibers are sheared laterally, causing stretch and tearing of the axons. This type of injury would make sense in the facet joints, as the axons would be sheared when the ligaments are stretched during impact.

The researchers suggest that chronic pain may originate in a number of ways from nerve injury in the neck:

First, immediate pain from such an injury is likely, due to the direct tearing of the nerves.

Second, injury to the axons can result in long-term biochemical changes in the nerves, resulting in "excitability and spontaneous activity." This would result in repeated pain signals to the brain, which could result in hypersensitivity in the central nervous system. This hypersensitivity has been linked to chronic pain after auto injury in a number of studies.

Third, injury to the ligaments could result in the release of inflammatory chemicals that could further irritate the nerve fibers in the facets, resulting in even more pain signals. The authors state that, "...such degenerative changes in cervical [facet joint] tissue may contribute to painful conditions in the neck following a whiplash injury."

"The findings of this study may have some clinical relevance. The presence of axonal changes in the present study provides credence to the onset of neuropathic changes in FJCs (facet joint capsules) stretched beyond physiologic limits. We propose that such affects may lead to alterations in sensory input and other pathological changes leading perhaps to peripheral neuropathy. This may have particular relevance in cases where the FJ have been damaged/or stretched beyond physiological limits and may be related to persistent pain after a whiplash event."